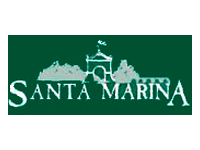 50kms from Where Seve Lived

Designed by Seve, Golf Santa Marina is an absolute stunner of a course. Sandwiched between the sea and the mountains just outside La Revilla, it's pretty tough but great fun. The front nine is hilly while quite a few holes on the back run along the river valley. The experts suggest you should not take your driver out of the bag more than five times during your round and you must pop into the 16th century converted clubhouse after it.